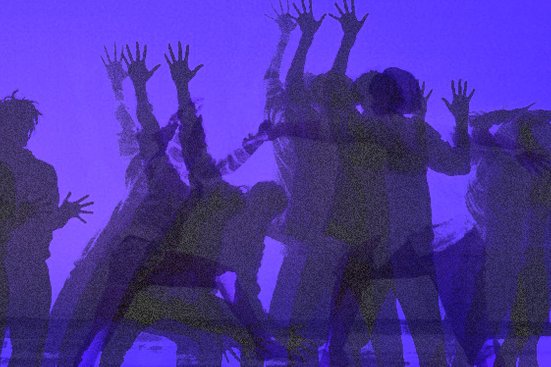 Manic Dancing wanders into earshot from beneath a canopy jungle of rustling woodwinds. We should remember the five-note figure on the piccolo in the first complete bar, and the gently swaying motion set up by lower woodwind and harp. A new quaver figure on violas, cellos, bass clarinet and cor anglais, starting at bar 10, is also of importance. Into this complex world, the piano enters from within the orchestra and is left high and dry as the first crescendo is shut off. These ideas are developed for a while until a new passage, classical in feel, begins in the strings. Alien notes begin to erode it, generating a passage of some rhythmic violence. As this is cut off, the soloist attempts a new version of the classical theme, which now sounds like a popular song. It is wreathed in harp runs, sustained  strings and dissonant held note in the woodwinds. The piano is instructed to play “una corda” and not to attempt to be heard above the orchestra. A violent crescendo introduces a new rhythmic section, derived from the appoggiatura which characterizes the popular song. This builds up to a wild climax, brought to an end by battering timpani. A quieter and slightly slower version, still derived from the popular song, ends the first part, and after a brief pause, what feels like a restatement of the opening material begins. This develops ideas from the beginning of the piece, but has not gone far before it encounters a new idea in 14/8 time, marked “minacciando”. In four bars, this rises to a grim climax, abruptly shut off.

The piano begins the central section, Largo, soon accompanied by wood block and tambourine, who give out the salient features of the 14/8 rhythm, although the time signature is 4/4. The atmosphere is unsettled, mysterious. Soon the piano lights upon the quaver figure from near the opening of the work, but in the new slow tempo this is not immediately obvious. Muted trumpet, then muted horn and pizzicato basses give out the opening piccolo motif. The piano discusses this alone, leading to a solemn outburst over wilting strings. As this dies away, a solo clarinet begins a seemingly interminable sequence over suspensions in the strings. Around this, a complex web of sound is built up by different solo instruments. When the clarinet has taken the sequence as low as it can go, bass clarinet and tuba take over, leading to a bleak climax. The piano reminds us of the opening of the Largo and falls into the depths, where a monumental crescendo begins, leading to a terrifying tutti on D, switching even more frighteningly to F. This is nothing more than the quaver figure from near the opening, played immensely slowly, and it ushers in a recapitulation of the first Allegro. There is some telescoping of ideas to leave room for later developments, and the themes are not all presented in the same order as at the beginning. When the popular tune arrives, the piano pretends to play it, but the sounds we hear are those of a harpsichord. The 14/8 section is developed into a scherzo-like passage, leading to the manic coda.

Manic Dancing was recorded by the Siberian Symphony Orchestra conducted by Dmitry Vasiliev with Marina Kosterina, piano, in July 2021 and was released on the Toccata Classics label in March 2022 : https://toccataclassics.com/product/steve-elcock-orchestral-music-volume-three/